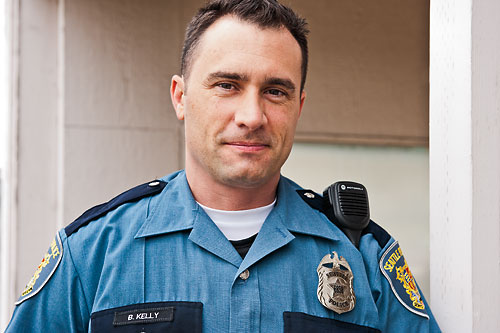 We get into roll call and we’re being briefed.  We’re being told Maurice Clemmons is in Seattle.  I remember leaving roll call thinking, somebody’s going to find him. I remember hitting the streets.  It’s on your mind, but the real world doesn’t stop.

It was actually a pretty boring night.  The only thing of note was that three cars had been reported stolen in a short period of time in a small geographic area.  So I started cruising the back streets.  Sure enough, I come across one of the stolen vehicles.

I had just passed Maurice Clemmons walking the same direction I was driving.  I didn’t know who he was.  Now he’s walking directly toward me.  I get out to address him and by this point he’s pretty close.  I get out of my car, turn and face him and that’s when he looks up for the first time.  I recognize who it is.  Training just kicked in from the second I recognized him.

I’m telling him, “Show me your hands.”  I’m thinking this is the guy who killed four cops.  He immediately dives into his waist area, which is where people normally carry guns.  He’s not following my orders, and I can’t see what his hands are doing because he’s turning away from me.  He’s walking around me and he’s starting to flank me.  I distinctly remember thinking he’s going for a gun.  So I end up shooting him.

The whole hero perspective is by far the hardest part.  As far as I’m concerned, I didn’t do anything.  I didn’t go out looking for it.  It found me.  I just reacted.  I’m not a hero.  I was just doing my job.  Nothing more.  Nothing less.