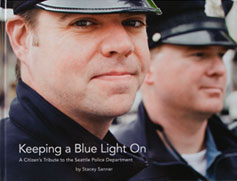 This book takes a rare inside look at the personal side of police work. Stacey Sanner was granted access to interview and photograph officers from the Seattle Police Department and as a result, she has captured personal stories about the experiences that have shaped them, the events and the people they remember, and the rewards and challenges of the job. The inspiration for the book came from Stacey’s desire to honor five Seattle-area officers who were tragically murdered in late 2009, five people who were targeted because they were police officers.  The book is a tribute not only to the fallen, but also to all law enforcement for the daily commitment and sacrifices they make to protect the communities they serve.