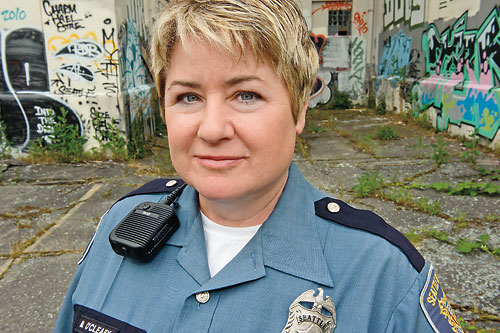 You’re on the edge of people’s lives.  You’re seeing them at their highest point of crisis and also in the little intimate moments that other people don’t see.  There are so many things that the public doesn’t realize that officers do and are involved with.

There was a woman, a call.  It was called in as a disturbance.  It was a mother and her teenage son.  He was upset, yelling and screaming, and he stomped out of the house.  I just remember being in there and they had nothing, no furniture.  There was just nothing.  It was right before Thanksgiving.  When I finally was able to talk to her about what was so upsetting, she told me she had a can of pineapple rings she was saving for the little Thanksgiving ham she was going to cook.  Her son was thirsty and he opened the can and drank the pineapple juice out of it.  She didn’t have the money to go buy another can of pineapple for her ham.  The images of that situation stick with me.  I can remember looking at the floor and her crying and just this can of juiceless pineapple sitting there.