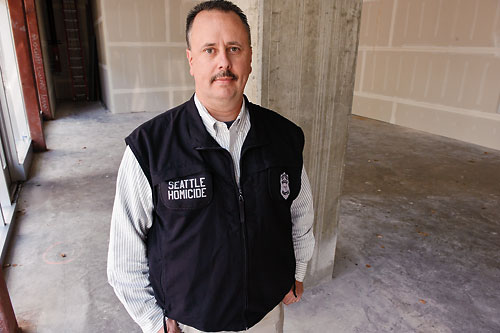 Are there cases that stick with you, haunt you?

Yes.  There was one that was extraordinarily brutal.  This victim was a lifelong mentally ill kid that was on the street wandering around, definitely in crisis.  Two suspects beat him to death over a several-hour period.  Slowly. They used these huge iron construction implements that hold the floor up as the concrete is poured on the next level.  They used a come-along, a cable winch with a crank in the middle.  They used two-by-fours.

The suspect talked about how they were pile driving him, the wrestling maneuver where you hold someone upside down and drop them on their head.  He was talking about how he’d done that and how he could hear the bones cracking.  While they beat this guy, they went into the construction site and found spray paint.  They not only sprayed the victim with orange spray paint on his face, but they also started tagging and writing stuff.

The victim was beaten so badly, they couldn’t determine which injury killed him.  He had massive blood loss and the hope is that he lost consciousness at some point and wasn’t awake for a lot of the beating.  But the suspect said the victim would be unconscious for a period of time, he would regain consciousness and they’d beat him some more.

How does it affect you emotionally to respond to a scene like this?

You know, it’s strange.  I think most of us probably do the same thing where we have to tell ourselves it’s not a person, it’s evidence.  There are times when you can’t overcome it.  When it’s a child or elderly person, it’s hard to.  But I have to remember I’m working for that person who is now part of the evidence.