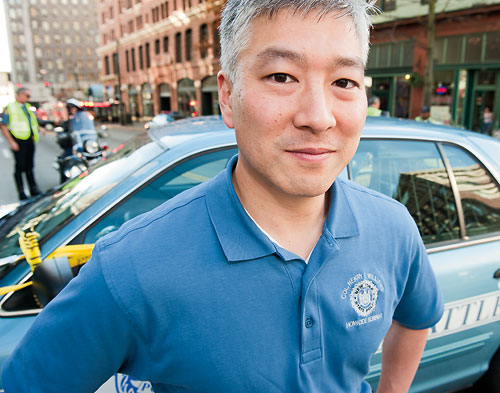 If you’re going to praise anyone in the police department for bravery, it’s the patrol officers that work the street.  They have the most dangerous job out there.  They’re exposed and visible, they respond to situations where the suspect very often has the advantage.

I vividly recall the first time I saw someone die in front of me.  It was a gang shooting.  A gang member shot another gang member inside a car with a .45-caliber handgun.  Several officers arrived before I did.  I remember the first officer on the scene yelling at the guy, “Come on, stay with me! Stay with me!”  It was just like in the movies.  He had three or four holes in his chest.  What stood out was he wasn’t bleeding out through them, which meant one thing, he was bleeding internally.  I just remember the officer yelling, “Hang on.”  You could hear the sirens of the ambulance coming, but it was too late.  He died right there at the scene.

I always knew I could do this.  My primary concern when I considered going into the Homicide Unit was that the cases I couldn’t solve would be the cases that would bother me the most.  The fact is that a majority of homicide cases can be resolved.  But due to a lack of eyewitnesses, evidence, or other circumstances, there are some murders that remain unsolved and go cold.  On my unsolved cases, the thought of a murderer being at large is always on my mind.  We just have to do our best in the initial investigation of these cases and hope that some day we can make an arrest and charge a suspect.

For the cases that you do solve, there’s definitely satisfaction in the fact that you can bring some sense of closure to the victim’s relatives and friends.  It’s nice to do something for them when they have to face this tragedy, bring some closure in a way.