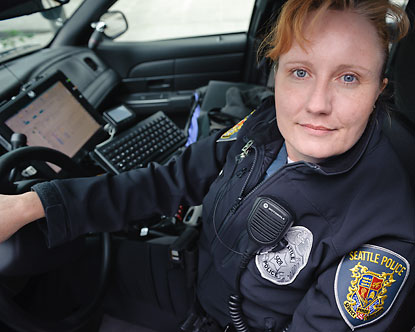 Is there anyone in particular that you remember from patrol?

There was one young man I got to know a little.  I’d met him on the street hanging out by a kids’ shelter.  He’d talk to me about my car and things.  Two months later, I went to a shoplift call and there he was.  I said, “I can’t believe that you would do this.  You were getting along just fine.  You broke the law.”

He went to court and got everything properly done.  He felt bad.  Next I knew, he was coming to me trying to prove to me that he wasn’t a bad kid.  And he wasn’t a bad kid.  His mom was in a mental hospital.  He didn’t know who his dad was.  He was a ward of the state.  He just wanted guidance and discipline from me.  He craved that.  Last time I saw him, I gave him a birthday present.  Because of the shoplift arrest, I found out when his birthday was and I got him some McDonald’s gift cards because he never knew whether he was going to eat or not.  I told him those were for him to wish him a happy birthday.  I don’t know where he is.  He’s probably 20 now.  For all I know, he’s doing well.  Maybe he got a job.  All I can do is pray he’s in a good spot.

What do your own kids think of your job?