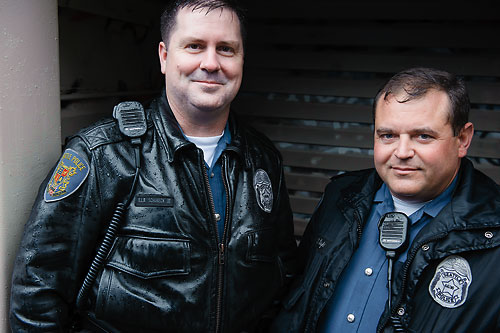 What are some of the scariest things you’ve seen?

Gene (laughing): His son’s favorite story.  We had a mentally ill guy causing a disturbance. Some construction workers restrained him.  We put him in the car.  He would talk calmly and then yell and jump so the whole car was shaking.  We were trying to get his name.  He felt we were mispronouncing it over and over.  I say, “How about I just call you Bob?  Pretty easy.  Same backwards and forwards.”  He starts yelling at us pretty profanely and says that we’re both very “Bob.”  I don’t know what Bob means to him, but he didn’t appreciate it.

Gene, I know you were close to Officer Brenton.  How have you gotten through this past year?

I can’t say I’ve ever really been afraid.  I’ve been cautious and concerned.  In that particular situation there is nothing you can do.  You can’t be out there working and not let anyone come up around you.  We’re there to assist the public.  There’s just no way to protect against it.

I hate to go to cop funerals.  We’ll put black tape over our badges.  A few years ago I started saving my black tape and putting it in my locker.  I’ve got a row now of black tape.  One of the guys was walking by my locker recently and saw it and asked, “What’s all that?”  And I said, “Officers.”  It just hit him then.

That’s all I had to say.  That’s not even a fraction of the number of pieces of tape since I’ve still started doing this.  I don’t know how many times I’ve worn it.  When I open my locker every day I see them and it’s my reminder.

Did it ever make you question staying on the job?

Gene:  Never did.  I’ve never had anything affect me so much to make me consider quitting the job.  That’s not an option for me.  One thing I like, apart from the fact that Bryan and I get along really well, is we’ve gotten to the point where we don’t even have to say what we’re going to do.  We just look at each other and know what we’re going to do next.  We just kind of think alike.

Bryan (laughs): Not even close.