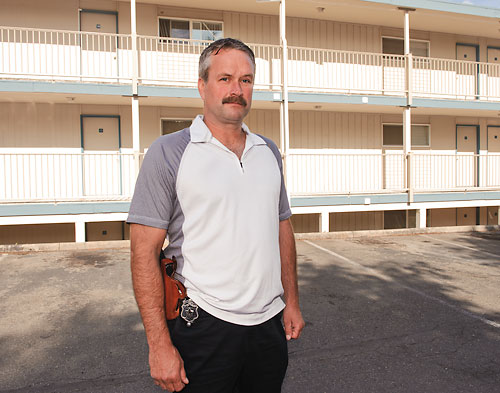 It was one of those days when things were just weird.  I was on loan to the FBI and we had this area that was infested with bank robbers.  We were having one to five a day.  One day, we were pursuing a bank robber who also had stolen a car.  He dumped the car and he got dropped off on Aurora.  We went to check the hotels.

A detective and an FBI agent were checking the west side of the street.  Special Agent Robbie Burroughs and I were checking the east side.  We see two agents take off on Aurora.  We get in my Chevy Blazer and turn on FBI radio.  Sure enough, there was another bank robbery north of us.  They had fired at state troopers who were pursuing them. They were coming southbound into Seattle.

Then there are shots fired on I-5.  We’re coming down the hill.  I realize they’re coming right at us.  I got my lights on and I stop in the middle of the road.  The suspects are not even looking at us.  I just figure they’re going to pass us.  And they’re cooking.  Our cars get probably 15 yards a part, and all of a sudden I see one of the suspects, take a 9mm Glock and go up out of the window.  I say, “Robbie, gun!”  I grab and shove her head underneath the dashboard.  He goes pop, pop, pow as he drives by us.  Our whole car got engulfed with muzzle flashes and it just reeked of sulfur.

We got in a pursuit and went flying downtown.  I turned south on a one-way northbound street.  I see all lanes of traffic coming at me.  I turned toward the sidewalk because I was trapped.  I said to Robbie, “Do you think we can make it through those parking meters?”  She said no.  But we did.  We flew down to Pike.  It ended there in a shootout.

Both suspects survived.  Everett, who shot at us, pled guilty and got 25 years in federal prison.  His brother fought it and he ended up getting 40.