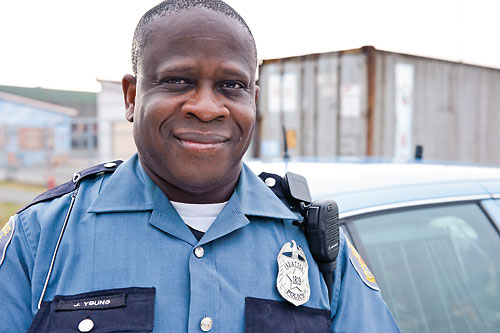 For the last ten years, I’ve been assigned to the DUI Squad.  I concentrate on looking for impaired drivers. If I hear of a one-car crash or a car crashing into parked cars, I start heading that way because it’s most likely a DUI.

What I look for varies.  It’s drivers’ behavior or what they say when you ask certain questions.  If the person declines to do the field test, I have to make a determination if there is probable cause to arrest based on other things.  Those things could include admission to drinking or a crash.  When people tell me they’ve been drinking Long Island iced teas and they’ve only had two of them.  They tend to come with me.

What people say is not shocking anymore.  People will say things like, “I’m bombed,” or, “I’m high.”  It’s not registering with them that they shouldn’t be driving.  Sometimes they’re shocked when I produce the breath ticket result.

I get a real satisfaction out of arresting drunk drivers because in my career, be it long or short, I am going to impact someone’s life in a positive manner somehow.  I’m going to save a life.  There are some people alive today because of what I and other officers have done in terms of DUI arrests.  So that makes me feel good.