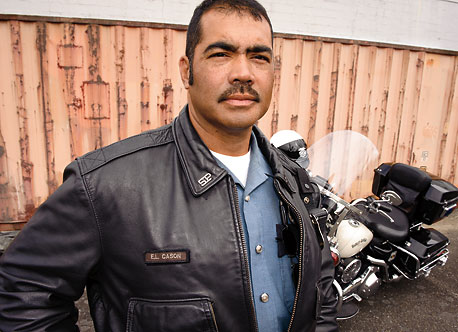 Patrol was great.  I worked third watch, South.  It was always crazy.  It was a slow night if you didn’t get involved in a pursuit or draw your weapon.

Some calls stand out because they were particularly sad, like this one little gal we picked up.  We couldn’t figure out what was wrong with her.  It turned out she had been raped.  She was 12 or 13 years old.  We end up taking her to the hospital and she calls her parents.  As soon as her dad walked in she says, “I’m sorry, Dad.”  And it just tore me up.  Of course, it tore him up.  I don’t know if she thought it was her fault somehow.  Or if it was because her dad was so upset.  It’s not her fault and here she was saying sorry to her dad.  I had to leave the room.  I couldn’t stand there anymore.

I’ve never had to use deadly force.  I’ve been in a lot of situations where I had to take a loaded gun off of someone.  It changed the way I do things.  When you come out of the academy, you try the “wristy-twisty” stuff to get people under control.  Those compliance holds do work, but when someone is actively fighting you, it’s harder to get them under control or in handcuffs than it looks.  I learned quickly, if they’re fighting you, you have to do what you can to take control right away.

I remember one incident.  I was contacting a guy and I asked him to take his hands out of his pockets.  He basically said no and took off running.  I gave chase and caught him.  By the time I finally got control, he was lying on a loaded 9mm with one in the chamber with the hammer pulled back.  All he had to do was roll over to get a shot at me.  That day, I learned if they’re fighting you, you need to be a little bit more aggressive.  You always have to remember that every confrontation is an armed confrontation.