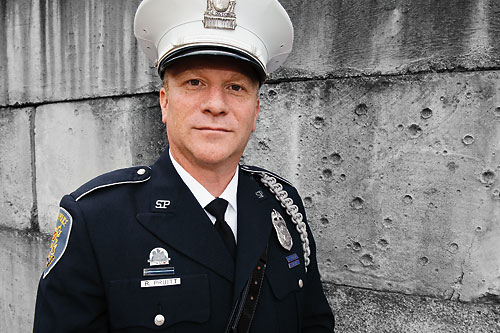 The Miller Community Center shooting was my big incident.  I got the Medal of Honor and the Medal of Valor.  I was just doing my job.  I think if you ask people who get these awards, it’s probably the same thing for most.

I’ve been in the honor guard for about 15 years, so I’ve been to a lot of award ceremonies.  You always congratulate the people and you always hear them say, “No big deal.”  You never think of yourself as a hero.  Everyone else thinks you are, but you don’t.  And then I was one being honored.  I thought, I’m not a hero.  I don’t want to get this award.

Most officers do things on a daily basis they should be awarded for and never are.  Like getting to somebody’s house and saving a life, or a car accident where they pull somebody out.  I just happened to be working that morning.  A lot of it’s fate.  Once you’re handed that, how do you react, I guess is the question.

In the honor guard you also go to a lot of funerals.  One of my proudest moments in the honor guard was the memorial for Tim Brenton.  I was one of the officers who folded the flag for Tim.  For us, folding that flag is a sign of respect and doing it right meant a lot.  I took that as a great honor.  I ended up doing the funeral in Lakewood, too.

During those times, you see the good come out in people.  I remember the first police funeral I went to.  I wasn’t in the honor guard, but I went in the procession.  People were lining the street.  It was kids with flags and older people saluting.  I thought, where are all these people on a daily basis?  I mean, they’re here, you just don’t get to hear or see them.  It was heartwarming.  Unfortunately, what it took to see that was not.