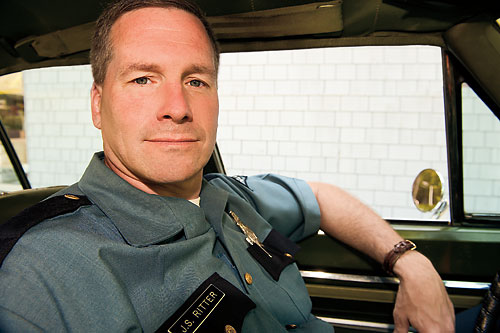 I experienced some pretty traumatic incidents that changed the course of my life.  It goes along with the territory.  The most traumatic was the Goldmark murders in 1985.  That call was pretty damaging.  I had seen a lot of violence and murders, usually the result of criminal behavior, but when you see a family of four butchered on Christmas Eve, including a 10- and a 12-year-old kid, it takes its toll.

Three of us responded.  We arrived and went through the house.  We walked down a long hallway.  I had a terrible feeling that what was behind the last door was something I did not want to see.  When we opened that door, we found bodies strewn across the floor, blood on the walls, blood on the ceiling.

These people were truly innocent victims and they watched each other die.  And they watched in a very painful way.  I know that the father watched his wife die.  He was the only one conscious and talking when we got there.  The kids were butchered.  I can’t even speak about what this monster did to them.

Several days later, my partner and I went to Harborview to visit the boy who survived and was struggling for his life.  We walked into his room and saw hand-drawn posters and get well cards from his schoolmates.  I started to cry.  He died shortly thereafter.