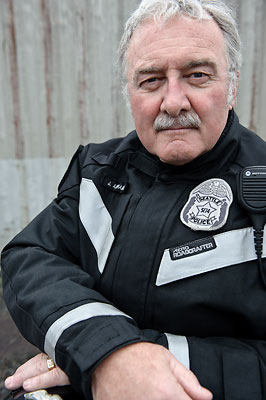 I got run over in 1991.  A call went out for a vehicle in a Key Bank drive-thru with a couple trying to pass a bad check.  I responded on motorcycle.

I roll into the drive-thru and the chase is on.  We end up in a parking lot that went behind a building.  He took off toward the far end.  We both thought there was an exit, but there was no exit.  I can’t get out and he’s coming back at me.  He did not see any other police in the area, so he thought he’d take me out.  According to the homicide detective, he impacted my bike at 62 miles an hour.

Luckily, he had decided to steal the only car at the time, a Ford Escort, that was front-wheel drive.  That was the only thing that saved me because my bike high centered his vehicle and lifted the front tires off the ground.  Otherwise, he’d have been up and over me and I’d be dead.  When he realizes he can’t go over me, he bails out of his car.

I’m screaming into my lapel mic, “Officer down.  Officer needs help.”  No response from radio.  I realize I cannot shoot this gentleman because I didn’t know where my target was.  So I stop and I holster my weapon. There are cars coming from everywhere.  They catch him hiding underneath a car.  That was my closest call on the job and it wasn’t a gun.  It was a car.  He got 33 years for trying to kill me.